July 2016 residential real estate sales have slowed from this point last year, though year-to-date performance remains strong. Year-over-year, the number of transactions fell by 4.7 percent, from 11,820 sales to 11,265. The value of transactions for July 2016 was $3.797 billion, 4 percent lower than in July 2015. Despite a moderate decline in pace and volume for July, year-to-date measures have outperformed 2015. Volume through the end of July 2016 exceeded $22.071 billion, a gain of 5.1 percent from last year’s accumulation of $20.992 billion.

Reflecting typical industry tempo, July sales declined from June; historically, the market climbs each month through June before tapering into the third quarter. Following the same seasonal trend, median price fell 4 percent month-over-month, from $289,500 in June to $278,000 in July. Median price did outperform last July by 1.1 percent, rising from $275,000. Average length of time on the market decreased 6.3 percent, from 64 days last July to 60 in July 2016. Rising median price and declining time on the market reflect limited inventory.

The Virginia residential real estate market has continued year-over-year and longer term improvement according to the Second Quarter 2016 Home Sales Report released by the Virginia Association of REALTORS® (VAR). Both the total number of sales and the value of transactions rose from the same period last year, to 34,688 units and $11.720 billion, respectively. Volume – the sum of all transactions for April, May, and June of 2016 – was 8.6 percent higher than the same period last year, and nearly 20 percent higher than the second quarter of 2014. Annualized residential sales, a rolling sum of the home sales closed in the preceding twelve months, rose from 109,574 units in the last quarter to 112,019 (up 2.2 percent). Year-over-year, annualized sales rose by 7.6 percent (from 104,091 in the second quarter of 2015). Consecutive periods of improvement in annualized sales, as demonstrated in Virginia’s market, indicate sustained market strengthening. Boosted by continued low interest rates and increasing seasonal activity, second quarter 2016 sales also rose 7.6 percent from the same period last year, from 32,243 to 34,688.

NAR General Counsel Katie Johnson has made a video to help educate buyers about how to avoid being caught up in a wire fraud scam during their purchase of a residence.

Virginia experienced year-over-year increases in residential home sales and median sales price in November 2015, continuing a trend of market improvement. Year-to-date sales through November 30, 2015, account for more than $32.02 billion in sales volume. Relative to the same year-to-date period for 2014, the value of sales transactions has increased by 11.7 percent. The number of sales closed in November 2015 was 3.3 percent higher than for that of the same month in 2014. November 2015 median sales price ($251,500) was slightly higher than November 2014 ($250,000) and 2 percent higher than November 2013 ($245,000). Days on the market declined more than 2 percent from last November. For the full November Home Sales Report, click here 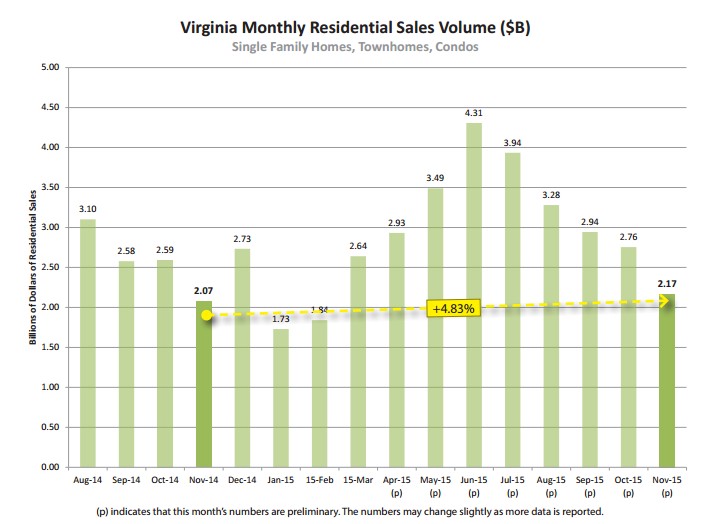 The Virginia Association of REALTORS® Third Quarter 2015 Home Sales Report indicates a rise of 11 percent from the same period last year, with a significant increase in volume and a slight increase in median price. There have been four consecutive quarters of increased volume. The pace of sales has quickened by nearly 7 percent from the same period last year. Third quarter sales represent over $10 billion in transactional value, contributing to a year-to-date volume totaling $27 billion. The median sales price has risen to $265,000, an improvement of 2.3 percent from the same period last year. Performing ahead of the national rate, the continued decline in Virginia’s unemployment rate to 4.3 percent in September may contribute to buoyed consumer confidence and, along with continued low interest rates, may encourage buyers into the market. 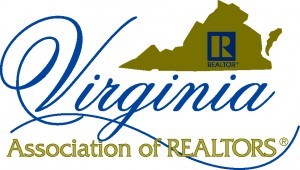 Sales prices up, volumes increase, according to Virginia Association of REALTORS® report

RICHMOND, Va., May 5, 2015–The Virginia Association of REALTORS® today released its 2015 First Quarter Home Sales Report and the numbers are good as the selling season goes into full swing.

“Virginia experienced a 6.3 percent year-over-year increase in sales in the first quarter of 2015,” said Deborah Baisden, president of the Virginia Association of REALTORS®. She added, “Sales volume is up 8.5 percent as is the median sales price, which rose 4 percent year-over-year. The first quarter is the harbinger for a strong spring selling season and we are seeing this momentum continuing in April.”

SALES UP IN MOST REGIONS

The number of sales increased year-over-year in every economic region of Virginia except for Northern Virginia, where sales had decreased 4 percent. The change in number of sales in Virginia has tracked the trajectory of sales in the United States as whole consistently throughout the year. The largest increase was in Southwest Virginia, with a booming 18.5 percent rise. The Central Virginia region jumped 15.9 percent.

The median sales price in Virginia increased 4.2 percent compared to the first quarter of 2014, to $244,467. All regions around the state saw increases with Southwest Virginia having the greatest increase of 10.8 percent.

Jones noted, “Virginia’s home sales prices should increase gradually over time but they most certainly have recovered from the recession.”

Year-over-year sales were particularly substantial in the $200K-300K price range. Home sales increased in all price ranges this quarter except for the $0-100K price range. Low sales in this range may have resulted from low market inventory in this category and/or higher financial barriers experienced by buyers in this market segment. All other price ranges saw increases in residential sales, reflecting the overall increase in sales year-over-year.

The entire first quarter report with charts and graphs is available on the VAR website.

The Virginia Association of REALTORS® (VAR) is the largest professional trade association in Virginia, representing approximately 30,000 REALTORS® engaged in the residential and commercial real estate business. VAR serves as an advocate for homeownership and private property rights and represents the interests of real estate professionals and property owners in the Commonwealth of Virginia.

Note: The term REALTOR® is a registered collective membership mark that identifies a real estate professional who is a member of the National Association of Realtors® and subscribes to its strict Code of Ethics.

Director of Communications and Media Relations